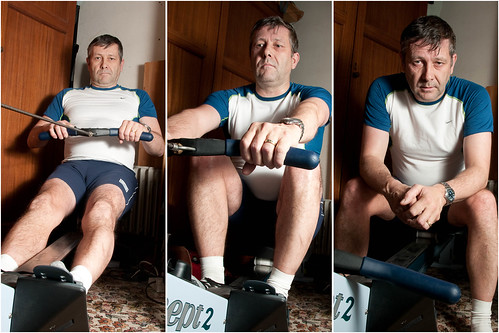 Decided to do the 52 weeks of fitness thing that Abe kicked off. Sadly the group is oversubscribed, but I decided I may as well do the work anyway. Nothing else seems to motivate me to exercise regularly… and if flickr (or rather the flickr community) can motivate me to do a 365, then perhaps it will work to get me fit.
[Edit – some folk now left the group, so now I am committed]

I do need to get fit…. I’ll be 50 next year & I’d rather enter my fifties fit than pathetic, else it will be downhill rapidly from there.

There was a time when I was fit…. I used to do alot of rock climbing, running etc (In fact I’ve run 4 marathons), but those days are long gone….. killed by age, apathy & injury.

Anyway I have a much neglected ergo (Rowing Machine)….bought because I cancelled the expensive gym membership I didn’t use, and theoretically the ergo would be much better value for money. Actually all it did was lose money in a single large lump sum & then collect guilt thereafter. I do use it, but rather sporadically.