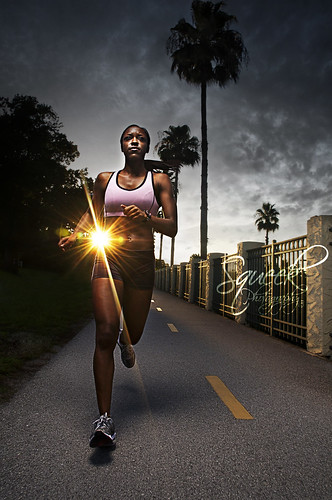 Again, here’s Evonne Personal Training,Monetique – I just *had* to share this photo and how we ended up with this shot. I *wish* I had though about grabbing my little flip video recorder…. but alas, I did not. Anyway, there’s a nice paved trail for people wanting to work out or whatever around this lake up the road from us. So I wanted to take Evonne over and have her running on this trail. The trick was getting this particular shot.

I thought originally that I would set up the two alien bees on either side of the path and use the SB800 on the camera [or something along those lines] so that I had another flash in front…. basically throwing a ton of light at her from all sides to kinda mimic that shot I did of Parvati a while back that looked like a nike add. I don’t know why I thought this would work and still be able to capture the stuff around her….. but I did a test shot with my brother and decided that this was a bad idea.

So here’s the Strobist info and comedic part:

My brother was running along toting the 18lb vagabond – Sean J. holding the lightstand with the Alien Bee 800 with a large softbox on it slightly in front of Evonne and pointed back at her at a little over 1/4 power and triggered with PWplusII. Me with the camera in hand, on continual focus, holding it as low to the ground as I could manage running along in front of them all. We would run until the guys were about to hit a pole that was alongside the path and then we would reset back down the path again.

On that note I think I shall invest in some type of cart for toting this stuff around like this. lol. As always, I am very grateful to my helpers on this shoot: Sean J. ( MiCTLaN ), Anna and my brother.

It was a little bit of happy luck to have caught the sun shining through the tree there right next to Evonne. I did not add that in in post. I have a couple shots that turned out with the flare from the sun like that but not positioned right there or anywhere where I liked the effect even.