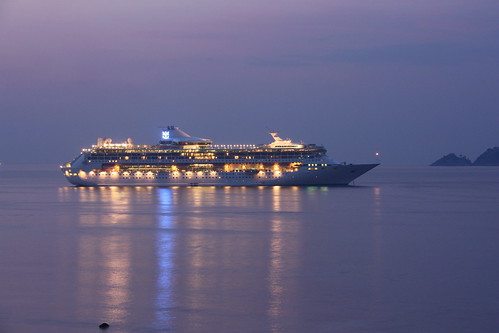 Royal Caribeans Legend of the Seas in Patong Bay, Phuket, Thailand.
MS Legend of the Seas was the first of the Vision Class cruise ships owned by the Royal Caribbean line. With a gross tonnage of 69,130 GT, the ship can carry 2,074 passengers. Its maiden voyage was May 16, 1995. Its facilities include a golf course, a theater and cinema, a solarium, two pools, a spa, a fitness center, a 2 story dining room called the Romeo & Juliet, the Windjammer Cafe, 4 themed bars, a dance center, a shopping center, a teen disco, a piano bar, an observation center, a rock-climbing wall and the Viking Crown Lounge.
Legend is the most-traveled ship in the Royal Caribbean fleet, having been based in Asia, Australia and New Zealand, the South Pacific, Alaska, Central America, Caribbean, the Baltic, Mediterranean and the Middle East during her 14 year career at sea.[citation needed] Starting in the winter of 2009 she is to be based in Asia on a year-round basis.[citation needed]
Its sister ship is the Splendour of the Seas.[citation needed]