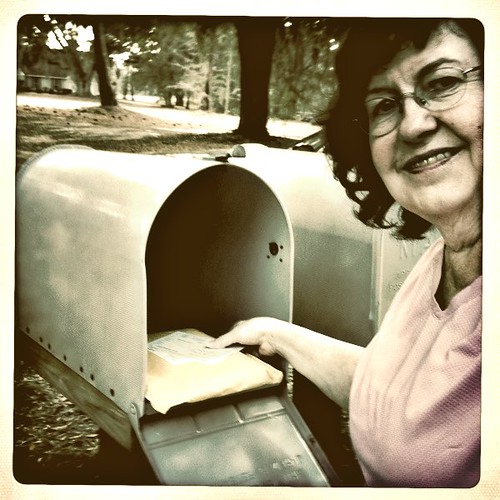 I grabbed a peanut butter sandwich as I left the house to attend a class, "A Photo Journey of the South Pole," at Valdosta State University’s Learning in Retirement. David Wiza showed his slides taken on trips from 1975 to 1981 with the military. He had been able to develop his own transparencies while at the South Pole. His shots were AWESOME. See the whole set here: www.flickr.com/photos/judybaxter/sets/72157625945169495/

Then I went to workout with my trainer at the fitness center at the VCC. My trainer worked out on the elliptical beside me to get his knee back into shape after his recent surgery.

As I drove into the driveway at home, I realized that I’d not taken a picture of myself at all. I decided to use the newly downloaded Hipstamatic on my iPhone. I didn’t really like the colors and contrast on the only good pic; so, I used Picnik to change it up a little.

Jim and I enjoyed a sandwich from Arby’s while watching a Wycliffe DVD from Netflix.

I’m still working on solving a problem. I need to plug in a headset (with headphones and microphone) to my Mac Pro. The headset that I have, which is rather old, has a black plug for headphones and a red plug for microphone. I plugged the black part into the port on the front and called from computer to computer to a geek-friend. He couldn’t hear me; so, I typed-chatted with him. I could hear him through my computer’s external speakers. Now what to do? I need the headset by tomorrow night. OK. I think I’ve got it figured out. Jim pulled out the big, heavy CPU of the Mac Pro. I unplugged the external speakers, and I plugged in the two parts of the headset. It seems to work. I’ll call my geek-friend tomorrow and see if he can hear me.